When we hear the word sacrifice, we often think of completely selfless acts in which someone does something for another entirely for the other person’s benefit. The image of a someone sacrificing his or her life for a lover frequently comes to mind.
But sacrifice isn’t purely altruistic.

The best definition of sacrifice is this: “To forfeit something for something else considered to have a greater value. Its giving up something of value something important to you to attain one which is more valuable.

Sacrifice does not mean giving up something for nothing; it means giving up one thing for something else we believe is worth more and it does not at all take away from the virtue of sacrificial acts. Instead of locating the merit of sacrifice in unselfishness, we can find it in a man’s chosen value system. The man who lays down his life for his family or for his loved one has chosen to place more value on their lives than on his own. 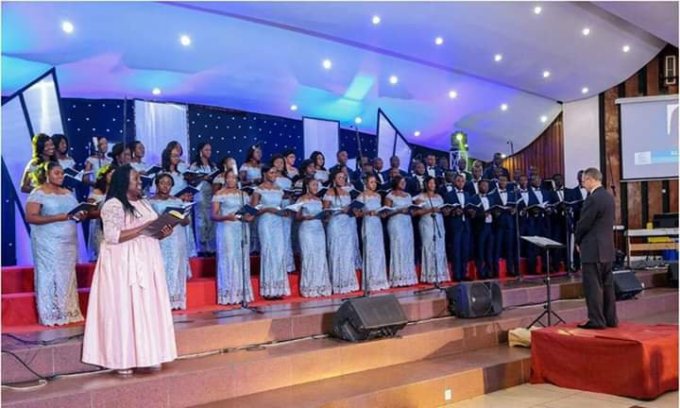 Today, I talk about the sacrifice of a Choir, not one I’m part of though but one i get to admire from a distance. Whose sacrifice I can best describe in relation to the sacrifice of my church choir towards a recently held choir competition.

To me being part of those to perform this year was a total “No Way” since I thought I had school plus work and couldn’t just add another stressful item on my to do list, above all I was to relocate in the first week in July. I told myself, I’m full can’t make anymore sacrifices.
But one look at those aged women who would report hours before practice time sometimes 2 or 3hours earlier only to leave late in the night, the nursing mothers who had to carry their babies and try to blend singing along with nursing their babies, my directors putting in all efforts to be there no matter how tiring a particular day might have been for them and how angry and hungry they were for success. I just couldn’t leave, thought of overlooking all that was so breaking my heart, i decided to stay and give out my part of the sacrifice.

I can’t really described to the extent how much I gave up but a look at my face covered with acnes I never had as a teenage and the number of times I felt dizzy almost fainting tells it all. To everyone it was a giving out your all or nothing, from the performing group to the kitchen group and all those giants whose shoulders we boldly stood on. After everything being crown with the 3rd position felt like all our pain and toil were worth it.

Going through all these clearly states what this Unique Choir goes through.

The first time I heard of this Choir was 4years ago through a friend who wouldn’t stop telling me I need to join that group or at least see them perform. The first time I saw them performing was in December 2015 and they were indeed amazing, and what actually pushed me to attend that function was knowing that they are in support of raising fund for Children living with Cancer.

One key thing is; A good voice can only get you far, every other thing demands sacrifice, hardworking and sacrifice. That is what indeed makes success.
The post on “Its Achievable” specified that our personal goals can totally be achieved when they’re linked to that of our community, for the betterment of something greater than ourselves.
So it isn’t surprising how far the choir has gotten to, and each time they have to give up on their own selves, on their personal lives, attending practice day and night, travelling to and fro so they can put in their all for a performance. They do it with their whole hearts because they know that a single performance out there is not only to win souls for Christ but also for a child’s life, for the happiness of the family who felt there was no hope, and a comfort to the shattered heart.

How could I forget the losses like the young and cute Yaa, with all the struggle to grow old lost the fight for life to cancer. The important thing is life is not about how long you live it but the impart you made while living.

Nothing in this world comes out cheap unless its a fake or for temporal use, otherwise they all come with a price tagged to it. The level of success is determined by the level of sacrifice made and hardwork attached.
How big the choir is tells how big their sacrifices has been so far.

Bigger task ahead of them is certainly going to demand bigger sacrifices and it wouldn’t be surprising to see them excelling.
Since there is a great hunger breaking their hearts, the hunger to save those dying innocent children, the yearning to see a smile not a sad painful look on the faces of these young ones is certainly bigger than their personal pain and sacrifices.

We all want something in life or to change something. But then what are you doing to bring out that change?
Ask yourself;
What do I need to sacrifice?
How much of it am I willing to give out?

If you are not prepared to give it your all then that dream isn’t breaking your heart enough.

A suggestion is;
Give it your all, and your very best and when your victory comes you will know and believe that it was indeed worth your all.